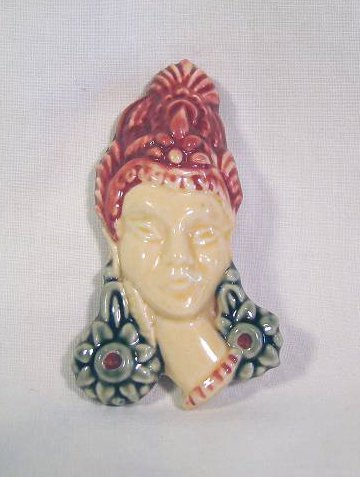 Contemporary pottery artisans make pottery jewelry for the American public. That's nothing new. American potteries that made vases, pitchers and planters also made pottery jewelry in the 1950s and 1960s. You probably know that Frankoma pottery made Christmas cards, but did you know they made jewelry, too?

Frankoma is probably the best jewelry maker, but Rosemeade, Royal Haeger, Purinton and Stangl also made pottery jewelry. Whether you choose to collect old pottery jewelry or contemporary pieces, these hand-worked and hand-painted small objects of talent are great conversation pieces. 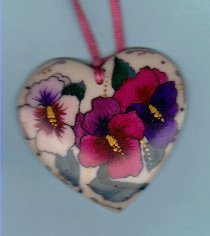 Frankoma made clip and screwback earrings from about 1955 to 1957, along with bolo ties for ladies. Some of the earrings had the Silla-Gem name on the backing cards, according to Phyllis and Tom Bess in their 1995 book, (affiliate link) Frankoma and Other Oklahoma Potteries (now in its Third Edition).

Frankoma also made some cufflinks and pins, primarily in western themes like cowboy boots and the Oklahoma state outline. The Cacti-Pin was also a Frankoma product, a little clay half-pot pin that looks as if it could hold a tiny cactus — if the wearer likes cactus needles. 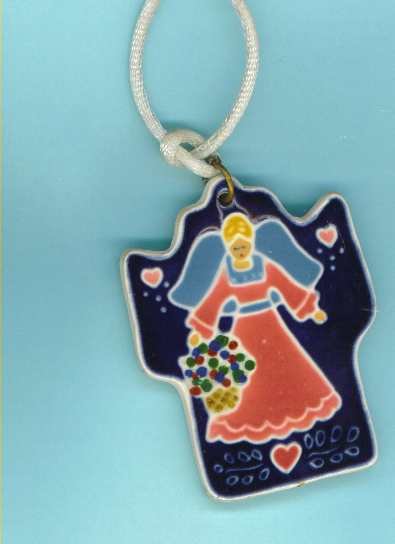 Rosemeade Pottery from North Dakota made animal figurines, with salt and pepper shakers one of their best sellers. They also made pottery jewelry, including pins in the shapes of fish. A squirrel holding a nut was another piece of Rosemeade jewelry. A heart shape painted with a squirrel on an oak branch was another Rosemeade jewelry contribution. This fine pottery operated from about 1941 to 1961. Sampson and Harms Beautiful Rosemeade book shows this jewelry as 'miniature flat pieces.' Darlene Dommel's (affiliate link) Collectors Encyclopedia of Rosemeade Pottery Identification shows them as pins. 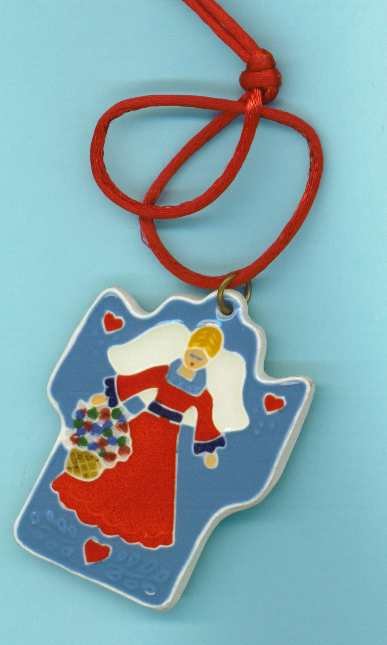 Purinton Pottery operated in Shippenville, Ohio, starting about 1941. Kay Kraft jewelry was a product of Purinton. Four round medallions on a leather cord made a splendid necklace. They made pottery charms for charm bracelets in heart shapes and rectangles. These pieces were hand-painted in primary colors. Susan Morris has some photos of Kay Kraft boxes and jewelry in her (affiliate link) Purinton Pottery: An Identification and Value Guide from 1994.

Figural pins were produced by Royal Haeger in primarily animal shapes. You can identify the Royal Haeger pieces by the glaze, as the factory used standard pot glazes for the jewelry. Mauve agate and chartreuse were two of the jewelry colors, but it also used rose and turquoise. (affiliate link) David Dilley's Haeger Potteries through the Years has a few pieces of Royal Haeger jewelry pictured on p. 262, including a rooster, ducks, lovebirds, a flower and a giraffe.

Stangl Pottery from New Jersey developed hand-painted porcelain jewelry, using porcelain blanks from Wenczel Tile. Kay Hacket was the designer, and these designs from about 1954 were made into brooch and earring sets. Many of the hand-painted designs are similar to Stangl dinnerware designs and the birds, but the shapes were round and oval.

Stangl produced pottery adaptations of dinnerware designs by Cleo Crawford Salerno about 1945. These pins and brooches were created from red clay and some are signed "Cleo." Stangl also made flowers and leaves for jewelry and buttons all through the 1950s. Stangl sold these hand-painted flower buttons for necklaces and clip earrings as well as buttons. Robert Runge, Jr. pictures a few pieces of jewelry in his (affiliate link) Collector's Encyclopedia Of Stangl Artware, Lamps, and Birds: Identification & Values 2nd Edition. 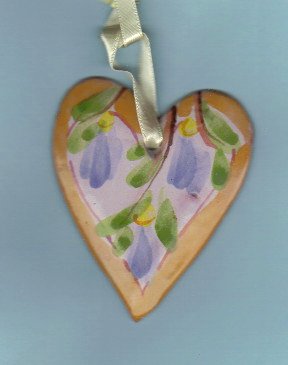 Whether you choose contemporary pottery jewelry or vintage pottery jewelry, you can't go wrong with collecting quality handmade pieces. Ann Wheat Pace and JoAnn Duban made contemporary hand-painted pottery jewelry that's still available, at least on the secondary market. These are two artisans I like. There are many more. Find yourself some American beauties, either old or new or both old and new.

If you're interested — we have some other articles on pottery and jewelry.

How to Sell Gold at the Best Price

Important tips on how to sell gold at the best price.

How to collect, identify, and purchase copper, costume, gold and silver jewelry, both antique and vintage along with jewelry we have for sale.

Identifying US Pottery By the Clay Color