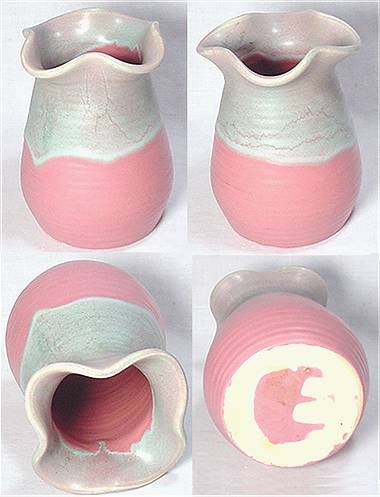 American pottery includes both utilitarian and art pottery produced in the USA in factories and studios. Most of the factories went out of business before 1980, as foreign imports made competitive pricing with any profit a difficult endeavor, but some studios continue to produce artistic products for sale in crafts shops and individual showrooms.

Antique and vintage American pottery commercial production was centered in states with clay suitable for firing and labor willing to work. Ohio was one of the major production pottery states, with factories around Zanesville including Roseville, Weller, McCoy, Brush, Robinson-Ransbottom and Burley.

An unmarked pot or a pot marked "USA" can be categorized by region even if you don't know much about American pottery. You do this by looking at the clay color.

If the clay on the bottom where the unglazed rim (foot) shows is yellow, you likely have an Ohio pottery piece. Watt Pottery of Ohio used a colorless glaze and produced yellow-clay pottery we call "yellowware."

Purinton also worked with yellow clay and produced hand-painted yellowware in Ohio until about 1941, when it moved to Pennsylvania. Robinson-Ransbottom made some yellowware, but also produced splendid glazes covering yellow-clay pots. Burley made some yellow-clay vessels, many with outstanding mottled glazes. 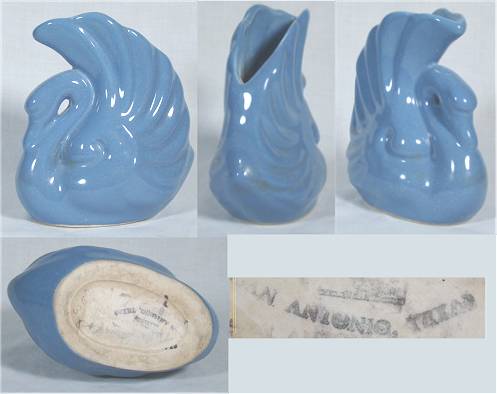 Texas and Arkansas had active production pottery factories in the first half of the 20th century. Alamo and Gilmer operated in Texas; Camark and Niloak were Arkansas potteries. Many lesser-known potteries had factories in these areas, but these are the ones that are easily identified with white clay. Check the unglazed base rim of Camark, Niloak, Gilmer or Alamo pottery and find a white clay.

RedWing Pottery used white clay for some of their production, so sometimes you'll find RumRill made by RedWing that is white clay, too. 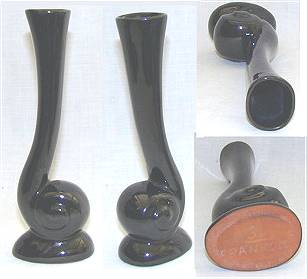 Frankoma didn't start out with red clay, and you'll see references to "Ada clay" in information about Frankoma. Ada clay was from an area outside Ada, Oklahoma and it was a tan color. Frankoma changed to Sapulpa clay about 1954, and that clay was a brick red, commonly associated with Frankoma. Frankoma added chemicals to the clay that turned it a pink color, starting in the 1980s.

Other potteries that used some red clay were Peters and Reed, Harris Strong and some Weller bakeware. Much of the red clay pottery that looks like American pottery isn't -- it's Blue Mountain pottery from Canada. Usually unmarked, with a drip glaze, this pottery often has combinations of brown and orange or blue and green glaze on a red clay base. 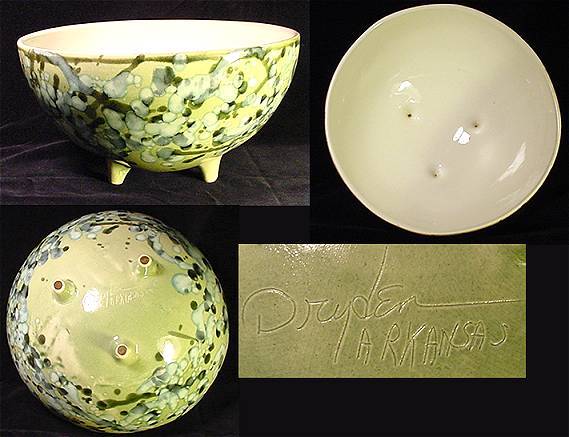 Early Frankoma used tan or beige clay, and so did Dryden pottery. Dryden was originally located in Ellsworth, Kansas, but relocated to Hot Springs, Arkansas in the 1950s. The Ellsworth production was tan clay and the Hot Springs production was a lighter color of tan, closer to the white of other Arkansas potteries -- since they used the clay from Malvern. In recent years, Dryden's clay fires white, because it's purchased from Kentucky-Tennessee Clay Company, according to Gay Dybwad in his book: (affiliate link) Dryden Pottery of Kansas and Arkansas: An Illustrated History, Catalog, and Price Guide.

Van Briggle pottery is usually hand-marked and often has a clear glaze on the bottom, but the older pieces are often tan clay.

Rosemeade made tan clay pottery in North Dakota. Western Stoneware and Monmouth made tan clay pots as well, but some of their output was stoneware, a different composition and higher firing temperature than the pottery production. 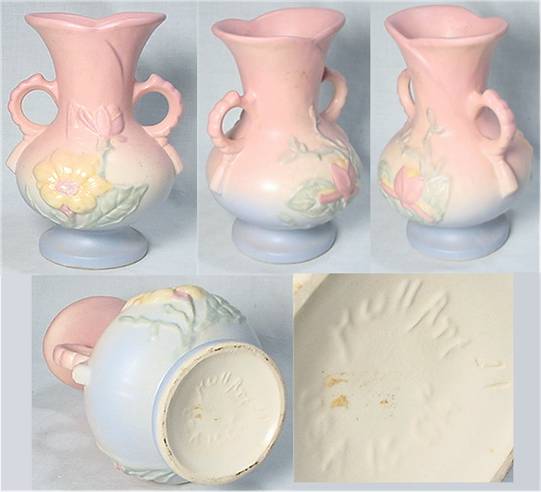 Several potteries used a pale yellow clay that looks as if it has some pink. These include Shawnee and Hull, two of the major production companies in the early 20th century. Hull and Shawnee made utilitarian and hand-painted art pottery with identification marks on much of their work. American Bisque and Royal Copley are two other companies that used this clay color, and did not always identify the pieces with the company name.

Check the clay color to identify vintage or antique American pottery. You may not know the maker, but you'll be closer to identification if you know the area where the pot was made.

You can find more photos and information about checking the bottom of the pot to identify American pottery in this article.

Learn about antique and contemporary pottery jewelry by potters like Frankoma and Rosemeade and modern artists such as JoAnn Duban.