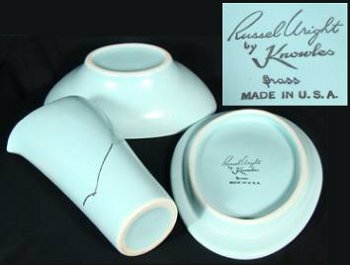 The English lion, shield, and crown appear on many American dinnerware pieces. American companies used the British-looking marks to get the American public to buy American – it had purchased English porcelain and dinnerware for years and considered it a superior product.

Whiteware is pottery, porcelain, china, ironstone, semi-vitreous porcelain or vitreous that has a white base clay, unlike the yellow ware used for Rockingham or Bennington glazes or red ware used for Pennsylvania slipware.

Although the American companies used marks that look British, that's not the only obstacle to identification of American dinnerware. Before 1891, no import restrictions requiring identification of the country of origin existed. After Congress passed the McKinley Tariff Act, effective in 1891, imported china and dinnerware was marked with the country of origin if it was made for export – but not all dinnerware you will find was made for export. Many immigrants brought dinnerware with them, and even during World War I, soldiers bought European souvenirs and brought them back after the war.

In other words, you can't rely on the 1891 Tariff Act to date your dinnerware, but it can help.

Japan used the name "Nippon" to identify Japan items after 1891 and didn't start using "Japan" until after 1921, when Congress revised the McKinley Tariff Act to require the American spelling of the name.

This also affected Czechoslovakian imports, as the "C" used by this new country in 1918 had no American equivalent. You may find marked Czech items with the unusual "C" or "Czecho-Slovakia" with a hyphen. These are often items made in the first few years after Czechoslovakia became a country in 1918. 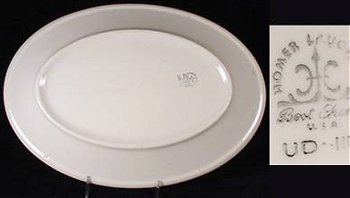 The center of the American dinnerware business at the turn of the 20th century was in Ohio and New York, with a few companies located in New Jersey.

The East Liverpool area of Ohio had a long tradition in the pottery trade, and transitioned to white ware to meet the demand. Companies you've heard of were making dinnerware in 1900 – including Knowles, Taylor & Knowles, Harker Pottery and Homer Laughlin China Company.

Taylor, Smith & Taylor started business in 1901. These companies were in East Liverpool, Ohio. Onondaga Pottery was in Syracuse, New York and Trenton Potteries and Union Pottery were located in New Jersey. Pfaltzgraff Pottery is another name you may recognize, located in York, Pa. 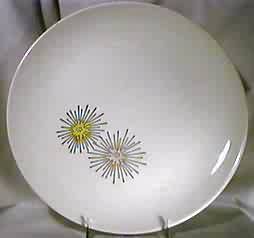 If you want a set of American dinnerware, you may want choose a pattern after about 1930, as that's what's still available. If you want to create your own table settings with miscellaneous pieces that are antique (over 100 years old), the turn-of-the-century white ware may serve your table well.

The condition and color varies with use. You'll find that some of these pieces are crazed with brown stains soaked into the body. Many have worn decals, but they have a country charm you'll not find in the later American dinnerware.

By the 1930s, plain white ware and ironstone was out of style and colored dinnerware was fashionable. LuRay from Taylor, Smith and Taylor came in pastel colors and was affordable American dinnerware. Homer Laughlin was producing dinnerware on the Trellis shape in the early 1930s, and Fiesta and Eggshell by 1935.

Salem made Briar Rose and Antique Ivory and Pope-Gosser made Rose Point dinnerware in the 1930s. Rose Point was white, and the raised rosebud design gave the plate rims a texture unlike the decaled dinnerware.

American dinnerware companies met with success, and business was contagious. California companies were making dinnerware starting in the late 1930s, much of it hand painted. Franciscan, Metlox, Bauer, Winfield and Weil produced colorful and hand-decorated dinnerware. This is the era we've bought for years, through the mid-century modern era and into the early 1960s. 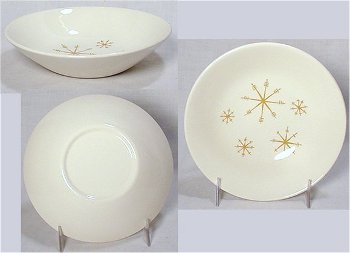 We have American dinnerware table and serving pieces that are vintage or collectible pottery, porcelain and ironstone, available. We sell Metlox and Bauer, Homer Laughlin and Knowles, Watt and McCoy, Frankoma and Gracetone, Redwing and other famous American dinnerware makers like Syracuse, Blue Ridge, Shawnee, and Stetson. We have unidentified pieces of American pottery and porcelain dinnerware, too. 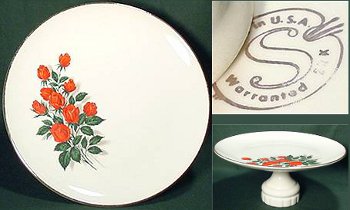 There are vintage pieces from Homer Laughlin, makers of Fiesta and Best China. This cake plate is from Sabin Industries in Pennsylvania.

We have California pottery and dinnerware and have dozens of patterns available, particularly Metlox and Franciscan patterns.

We sell hand painted dinnerware that is no longer made in the USA, like Blue Ridge and Stetson. Blue Ridge pottery is wonderful art as well as dinnerware. 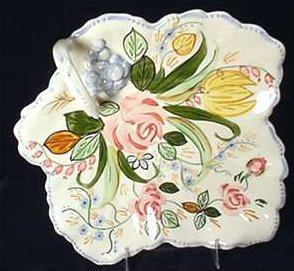 Do you have a special dinnerware set or piece you are looking for? This is the place to find it, since we have an extensive inventory for sale.

Just let us know what you are looking for – we may have it. We have many dinnerware patterns, all organized, available and ready to ship, many not listed. Email us if you have questions or want to make a purchase.

Check our Gallery of American Pottery Items and Dinnerware on iOffer.

For more information on American dinnerware and pottery, see our article on identifying US pottery or browse our articles on pottery and glass.

Want to buy? You are welcome to pay with PayPal, money order, personal check, cashier's check, or just about anything that looks like money. Contact us for PayPal invoice. US Shipping Only.

Learn about antique and contemporary pottery jewelry by potters like Frankoma and Rosemeade and modern artists such as JoAnn Duban.

Identifying US Pottery By the Clay Color

How to collect, identify, and purchase copper, costume, gold and silver jewelry, both antique and vintage along with jewelry we have for sale.

Tips on Christmas ornament collecting and collections with items for sale.